This weekend I watched 2 very different movies that had something very much in common.

Both movies involved War and something more.

For the one movie, critics raved about the fight scenes, the action, the adventure. 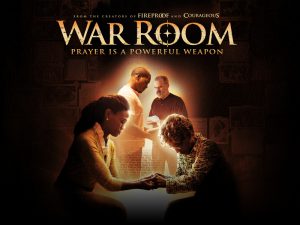 The other movie was trashed by critics because it dealt with conflict in a very different way.

To be honest, I did not rush to see War Room when it first came out several months ago because it was so blatantly about prayer. I did not want to be preached at.

It was not in a condescending way. Instead it was more of a challenge.

How do we fight our battles?

Do we even have a battle plan — a strategy?

Or do we just rush headlong into battle and hope for the best.

As Miss Clara [from War Room] says in the opening monolog,

To win any battle,
you’ve got to have the right strategy and resources,
because victories don’t come by accident.

Whether it is called “The Force” or “God”, there is a higher power that can fight on our behalf.

This power is not some distant and capricious character that stands aloof until we say some special/magical words.

It is a power within. It is close and intimate.

Because this power is close and intimate, we can communicate with it and that is done through prayer.

But as with any healthy relationship, there needs to be 2 way communication.

So there is also the need to listen, and that is done through meditation.

As for the challenge — I accept.

I am learning to use the right strategy and resources that are available.

What is the choice you make for your life?

Something to think about.