My wife & I recently watched a movie, that to be fair, was not a movie I was eager to watch.

However, my wife wanted it so I found it for her and being a good husband I watched it with her.

The movie was Julie and Julia.

It was about 2 parallel stories;

I was intrigued by the example of persistence demonstrated in both stories.

In both cases, there was a dream and they stuck with it. 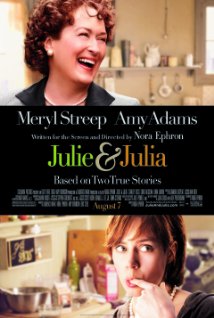 Back in the 1950’s was the time of Julia Child — she was the wife of an American diplomat.

While living in France, she fell in love with French cooking and ended up writing the book Mastering the Art of French Cooking.

The idea of writing the cookbook was the end result of an idea that developed over time.

The cookbook is the connecting link to the second story, that of Julie Powell, who in the early 2000’s was a frustrated government worker.

As portrayed in the movie, it was her husband who helped her land on the idea of writing a blog.

The initial idea was further fleshed out to the idea of blogging and cooking her way through Julia Child’s cookbook in one year.

For both characters, Julie and Julia, there were struggles they went through.

They both had meltdowns.

There were times when things just did not work out for either one of them.

But, with the support of their husbands, they persisted.

Although I did not initially want to watch this movie, I am glad I did.

Please share your thoughts about Persistence in the comments below!