Have you ever noticed how just a small tweak can make all the difference? 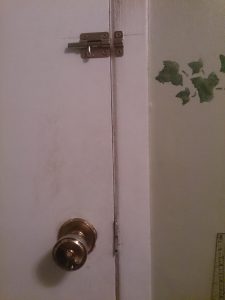 I have a live example of that in my own house.

There is a bathroom that had been just a spare bathroom, but is starting to become more frequently used now due to some changes in our lifestyle.

These changes included the recent construction of a dartboard cabinet.

The door on this bathroom did not close properly.

The problem was with the latchplate.  The hole for the latchplate was cut a little too high, so the door bolt could never drop into the hole.

For the longest time, it was not important and we just lived with it.

Then as the bathroom began to be used more frequently it became more of an issue. 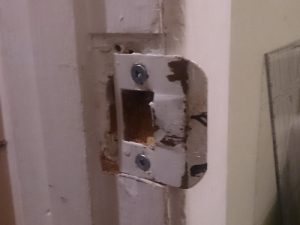 latchplate fixed and in place

Finally as a quick fix, I attached a latch and bolt to keep the door closed while the bathroom was being used.

The quick fix worked, but it did not solve the issue.

I finally gave in to the frustration.

There was some doubt whether the hole could be recut and still have the latchplate hold properly.

But I gave it a try.

I was able to cut the hole and still have enough solid wood for the top of the latchplate to grip properly.

What is there in your life?

Is there some little tweak that if you were to work on could make a big difference?

Or, do you have a story of your own about a little tweak that you made that you could share in the comments below.